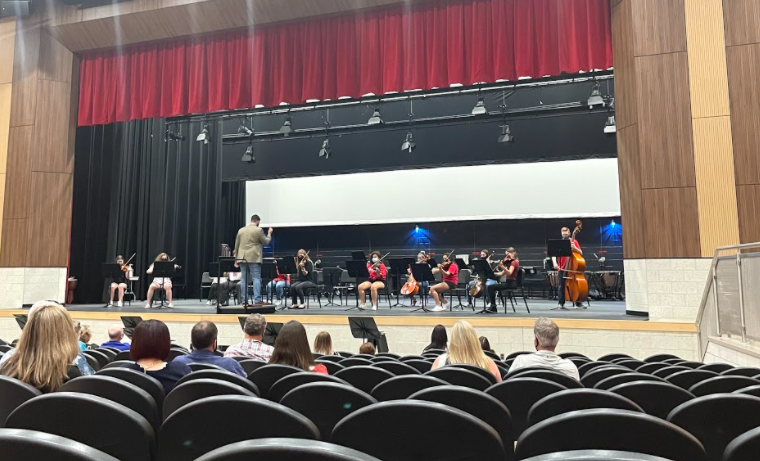 Crofton High’s Band, Orchestra, and Chorus held their first concert at the Crofton High Auditorium on Monday, June 15th. Crofton’s string orchestra, conducted by Mr. Eric Von Sas opened up the performance with the pieces “Yorkshire Ballad” and “M to the Third Power.” The concert choir, conducted by Ms. Briana Gresko, followed with a virtual performance of “Sisi Ni Moja” accompanied by Ms. Devon Hale-Smith. They also sung the pieces “Wanting Memories” and “Be Like the Bird” in person. The percussion ensemble, led by Mr. Von Sas went on to play the piece “Pads in Isolation”, or as Mr. Von Sas liked to call it, “Pads Socially Distanced.” Crofton’s concert band, led by Mr. Von Sas closed the concert with the pieces “Australian Up-Country Tune” and “Rampage!”.

Crofton freshman Madison Knoppel, who is a part of the Crofton High Concert Choir, said that “for being virtual for more than half of the school year, the choir did really well.” She believes that, due to their confident sound, the choir performed the piece “Wanting Memories” the best. Her favorite part of participating in Crofton High’s first concert choir this year was obtaining more experience and meeting new people with similar interests. She is excited for the choir’s future because of the work and effort that everybody put into this concert!

After the first performance, concert choir conductor Ms. Gresko felt “so incredibly thankful that our students had a chance to make music together and share that with others.” She is proud of the effort, dedication, and how they were able to unify their sound despite not regularly practicing together. She believes that this concert displayed the great potential and future of the music department at Crofton High School. Ms. Gresko and Mr. Von Sas would like to express their appreciation for all of the support that the music department has received and they are excited to see how the music program can grow!